Would you consider VIP access to next year’s Firestone Walker Invitational Beer Fest on June 3, 2017 enough of a prize to get excited about?

What if you add in the opportunity to brew at the R&D kettles in Venice? And then add more, blending beer at the Barrelworks in Buellton? 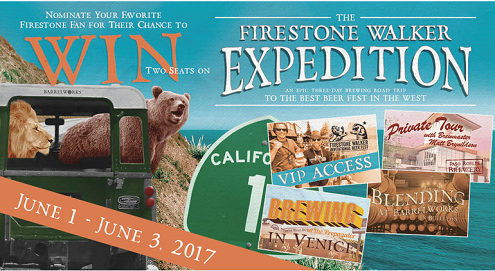 To reiterate, you get to….

Prize 2
“Next up is a visit to Barrelworks in the town of Buellton in Santa Barbara County. Here, Barrelmeister Jeffers Richardson and Master Blender “Sour” Jim Crooks will show the participants how to blend their own unruly brew from a variety of eccentric Barrelworks creations.”

Prize 3
“The journey concludes in Paso Robles in the heart of the Central Coast wine country, where participants will enjoy a private tour of Firestone Walker’s main brewery with Brewmaster Matt Brynildson. On June 3, the group will head out for VIP early-entry to the Firestone Walker Invitational Beer Fest, which has been hailed as one of the nation’s top beer festivals”.

All you have to do is :to nominate their favorite Firestone Walker fanatic by producing and uploading a video explaining what makes that individual worthy of joining the Expedition. Three winners will be selected. The prize for each winner is two all-expenses-paid spots on the Expedition.”

All the rules and FAQ’s can be found HERE. You have until December 11th to create a compelling video.