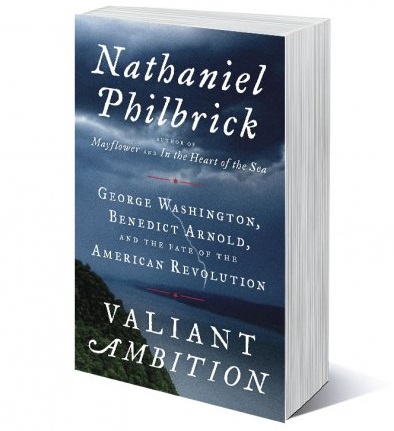 In this time of political upheaval, I feel pulled to re-read history to see that it wasn’t all peaches and cream when our (possibly now damaged beyond repair) democracy was being created.

Which is why I picked up Valiant Ambition by Nathaniel Philbrick. And my first thought upon putting it down was, “Why couldn’t this be taught in history class?”

There is so much intrigue and infighting and messy back-and-forth’s and impossible to believe parts that you can’t help but turn the page.

This book focuses on two people for a limited time frame. George Washington and Benedict Arnold from mid Revolutionary War to just before the end of the war. Both men are interesting in vastly different ways. Reading about the uncertainty in Washington as he made wartime decisions and the brashness of Arnold which helped him win battles but certainly didn’t win him friends is fascinating.

Also to know that Arnold was wounded twice in the leg. One time so badly that it took him months to recover after almost losing it adds to the complete picture of the man who finally became so disillusioned and poor that he felt he had no recourse but to turn traitor.

To drink with this book, with its description of the privations of the army at (especially Valley Forge) puts me in the mood for something dark and heavy. Add something that would be understandable to a military man back in 1776 too.

Heavy Seas Peg Leg Imperial Stout – the leg is integral to the story as are the seas & waterways of the East Coast.

Sam Adams New World Tripel – Obvious to choose a patriot who gets passing mention in the book but also a strong hearty beer with spices that remind of the maritime trade.

DC Brau Penn Quarter Porter – Even though the capitol was not yet set in DC, the whole area was well trodden Washington ground.

…and you can finish with the classic Liberty Ale from Anchor Brewing.