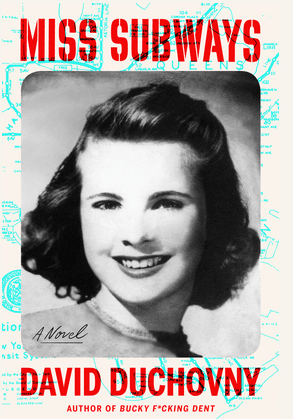 Yes, it is that David Duchovny of X-Files and Californication. And Miss Subways is his third book but the first that I have read.

The book follows Emer, a teacher in New York City whose romantic life is complicated not only by the usual pressures of life but by the existence of Gods of long ago erase her boyfriend Con, from her life, only for them to re-connect. It is a rom-com mixed with Neil Gaiman lite and chock-filled with contemporary asides.

Overall, I like quite a few of the ideas in the book. Quotes in the subway cars amidst the ads and people on phones is well done. Duchovny has selected telling quotes without being too obvious. I like the school characters as well. From the principal Sidney to her friend Izzy and even the three troublesome students have single but cool dimensions to them. New York is given a lived in and local character as well which adds a nice dimension.

The boyfriend with the weird Gaelic name seems a bit wimpy to me, especially in comparison to Emer. She could do a lot better, is something I uttered out loud on a couple of occasions. And that shortcoming sort of cuts the book’s knees out from under it. Con doesn’t have to be perfect but he seems weak even for someone who has proverbially sold his love.

Now if this blog came to you from New York and not Los Angeles, the beer choosing would be a lot easier. Most New York beer doesn’t really make it out to us but considering the romantic nature of the book, I really do need to pick an Other Half beer, so I will go for Short, Dark and Handsome, their Stout.

In wider release, since their is plenty of Irish in this book, Guinness would be a good choice. Or you could go light and go for Harp instead since that musical instrument has more romance behind it.

More local, head to Ogopogo Brewing in San Gabriel and pick up their stout, Ashrays. Those are mythical water creatures and the book deals heavily in myths but as the kicker, they are sometimes called the water lovers or water ghosts.