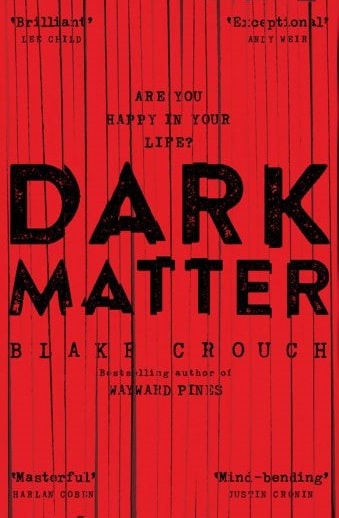 There are books that you read and when the end is reached, your first utterance is, “Well, I can see that being made into a movie.”

Such is the case with Dark Matter and in this case, that is not a disparaging remark. The author, Blake Crouch, has TV in his writing background, Wayward Pines so when the hero (more on that later) starts jumping from parallel earth to parallel earth, you can see the special effects in your minds eye.

The tale starts with one Jason Dessen a professor at a small Chicago college who us abducted and shot up with chemicals and deposited not in his world and has to find his way back.

If you are a time travel nitpicker, then this is probably not for you. The villain of the piece, well I can’t spoil that reveal since it doesn’t come until a bit later in the book is a bit problematic until later in the book.

But if you bought Matt Damon as Jason Bourne, you might shell out movie tickets to see him portray this Jason. It’s right up his alley.

Beer Wise – The label design and names from Bottle Logic in Anaheim fit this book to a T. Get a Recursion IPA or an Ocularity DIPA and become bitter with the villain. Better yet, pick up their GABF winning Lagerithm Black lager.

Since the book is set in Chicago, you can search out some Half Acre beer and enjoy a Pony Pilsner while going through the pages.

Or if you want to keep a science theme going. Get a growler from L.A. Aleworks from their SpaceX line of hoppy beers.