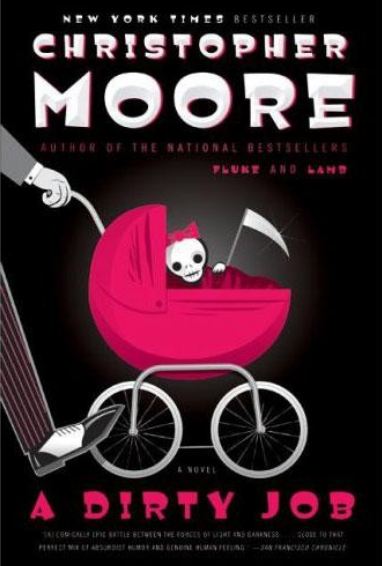 In time for Halloween season, the book of the month is suitably about death, or what happens when a normal guy with a baby becomes part of Team Grim Reaper.

That is the premise of A Dirty Job by Christopher Moore. This is the first book by Moore that I have read and I did appreciate the style.  Jaunty with a mordant wit.  Very of the age and descriptive of the area of San Francisco.  The character names like Minty Fresh are fun if over the top.  Overall, this book moved along well, the side characters are fun and the device at the start is clever.  The problem that I have is that the main character, Charlie Asher is continuously described as a beta male to the point where I began to really hate that pair of words.  He is a wimp and whiny and a hypochondriac and I didn’t much care for him except for the last section in the climactic finale.  That finale takes a while to arrive and then is gone too fast.  A mixed review from me.  Not enough though to make me want to read the sequel though.

To drink while reading it, I would start with He’Brew Death of a Contract Brewer a Black IPA.  First reason, there is a bit of religion woven into the book plus of course the whole word Death makes it a no brainer.  Keeping with the death theme, Death & Taxes from the fabulous Moonlight Brewing Company would be a great choice.  A lighter ABV but dark lager is a great reading session beer.  If you want a label with the scythe and reaper then Pale Death a Belgian-Style Imperial IPA from Double Mountain in Hood River.  A deeper cut would be Park from Fort Point Brewing in San Francisco.  Finding a parking space in SF is a sport and is mentioned frequently in the book so that would be my choice.