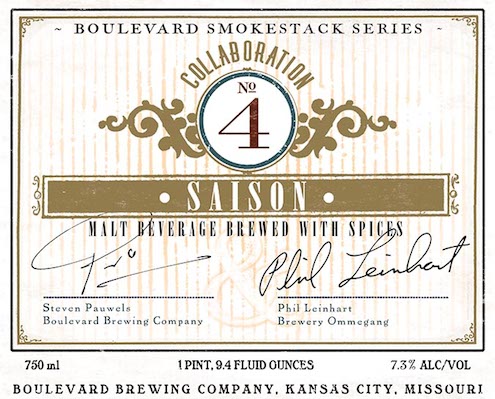 Ommegang brewmaster Phil Leinhart is the latest to join Steven Pauwels the brewmaster at Boulevard for a collaborative brew. And befitting the Belgian background of these two Belgian owned breweries they have gone the Saison route.  They brewed up a batch of wort wand split it into two fermentors. One had Boulevard’s primary Belgian yeast strain pitched into it, and the other got Ommegang’s house yeast strain. Then the two now different beers were blended into one, Collaboration No. 4. Oh and some sweet orange peel, lemon peel, coriander and grains of paradise were added in which is very wit-ish.  Maybe it’s a new hybrid? SaiWit. Witson?